I suppose every little girl gets into her mom's makeup at some time, I just didn't expect such an incident at 13 months old :)  I put Olivia down for her nap in her pack n play and then went into the living room to read my book.  I could hear her in there playing and chatting to herself for half an hour!  I wondered why she wasn't tired, but figured as long as she sounded happy I'd leave her in there.  At 4:30 when it was time for her to wake up, I walked into the room and saw what looked like a crime scene in her pack n play.  Olivia was asleep on her stomach with her face buried in the blanket, but the walls were covered with red handprints and fingermarks.  Her dolly and bear had red faces, and the sides of her pack n play were smeared with red.  I was afraid to turn her over.  She woke when I called Jack into the room and sure enough, was covered.  She still had the empty tube of lipstick firmly grasped in her hand.  I know she didn't have it when I put her in, so the only conclusion is that she found it earlier in the day and dropped it into her pack n play for later.


She got mad and started crying because I wouldn't pick her up.  I had a white shirt on! This pic is pretty blurry.  Probably because I was shaking, I was laughing so hard. 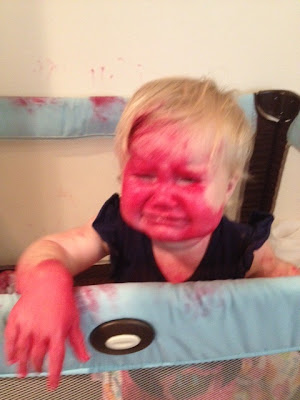 Jack was brave enough to hold our little red beast, but she wanted mom and just got angrier that I wouldn't hug her 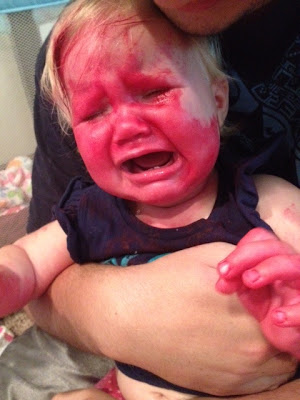 Finally I stripped down so I could comfort her and put her in the bath.  She looks like she's about to audition for the next Braveheart. 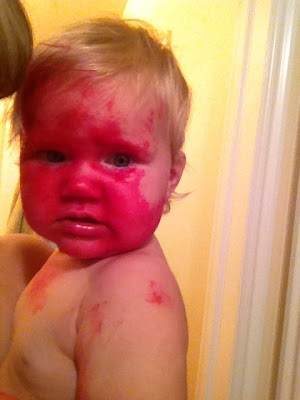 This pic is my favorite. I've looked at it in my phone and laughed a dozen times.  I've debated whether to post it since she is naked, but the aerial shot hides most of her....ahem...area.  Maybe I'll delete it when she turns 16.  Or maybe I'll put it on her slideshow video at her wedding. 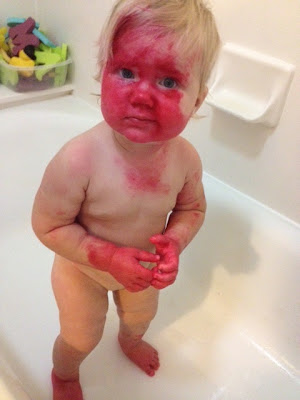 She looks so sheepish
ummm...let's just go ahead and wash this off, and then we can forget this whole thing.  Okay mom?
I had to scrub and scrub her hair, hands, feet, and cheeks, and then use mild eye-makeup remover around her eyes and nose.  She still had red in her hand and feet creases for four days after.  The ironic thing is, I don't even wear lipstick.  This was probably the only one I owned and I don't even know where it was.  That's how it goes though :)
Posted by McCall at 10:49 AM