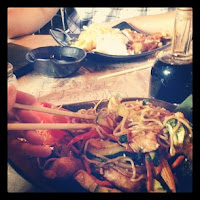 This is one of my all-time favorite movies.  I've probably seen it twenty times.  The first time I saw it I was 14 and when the end credits rolled I started it over and watched the whole thing again.  When I found out it was at Sundance this season, I begged Jack to take me.  My husband isn't so much for the stage unless it is Les Mis, so he took his sweet time getting tickets and by the time he made the call they were all sold out.  All of them.  Every showing.  So he put his name on the standby list and got a call Thursday saying they had two tickets for Friday night.

I didn't think the play would meet my expectations because they were so incredibly high, but it really, really did.  The night was completely magical.  My youngest sister came up to watch Olivia and we stopped to eat sushi at Happy Sumo before making our way up the canyon. 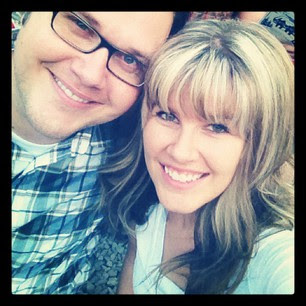 There was an insanely long line to ride a tractor-pulled wagon thing up the hill to the theatre so we decided to hoof it instead.  Jack has this crazy quirk that involves a maniacal need to beat the line.  Or people getting into a line.  Or people parking.  I never see him move faster than when he is trying to beat someone to a destination, whether it be for a table at a restaurant or up the Everest that held the Sundance stage at it's peak.  The 'strenuous' warning sign at the bottom was an understatement and Jack had to basically drag me up the hill.  I joked that he would move faster trying to get a good seat than he would if there were a drowning child at the top.  He didn't appreciate that.

We did get the best seats in the house though.  Fourth row up and center.  The cool mountain air felt so good after the heat down in the valley, and the breeze carried the smell of rain and pine.  It sprinkled a little during the show, but it only added to the effect.  The actors were amazing and there were a few songs that were not included in the movie (rightfully so, they were lame).  One song in particular we could not stop laughing about.  The 7 Brothers sang it while they were missing their girls and weren't allowed to see them all winter.  Let's just say it would have boosted the rating of the movie up from G to PG :) 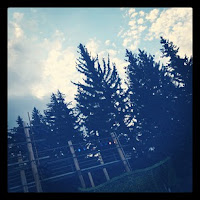 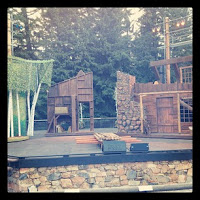 The man who introduced the play told a cool story about how, when Robert Redford built Sundance and the theatre, he thought Seven Brides would be the perfect show to perform up in that setting and how much he loved the story.  He had his theatre guy (obviously I'm paraphrasing. "theater guy"..?)  call to get the rights to the story, but he was told he could not buy them.  So then Robert Redford calls the owner of the rights himself and he also was told no.  Apparently Mr. Redford does not like to be told no, so he decided to go right ahead and instead put on a production of Five Brides for Five Brothers in the theatre's first season.  Now, 35 years later, Sundance was finally able to purchase the rights for the real story.  And I was so pleased I was able to see it.  If you've never been to a production at Sundance, I would highly recommend it.  Just secure your tickets early. 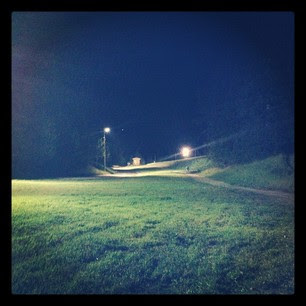