Saturday was our snorkeling excursion.  I was dreading it.  We had booked it weeks in advance and I had been thrown into panic mode on more than one occasion before the trip just thinking about it.  The trip was really just a trip the the Molokini Crater and another site to snorkel and see fish and sea turtles, but the fact that we had to travel through open water and the company was called The Pacific Whale Foundation did not sit well with me.  All my friends were stoked though and I didn't want to be left behind, so we went ahead and booked it with them.  $80.  $80 to face my fears.

If you don't already know, I'm very afraid of whales.  Remember this story? I have been scared of them since I was very small, I'm not sure why.  All I know is that they are too big.  Jack always makes the case that they are extremely gentle creatures and I tell him that it doesn't matter because they could swallow you or land on you without even realizing it.  Jack witnessed the extent of my fears for the first time on our Honeymoon.  He took me to SeaWorld and thought I might enjoy the Shamu show.  He parked me right next to a platform in the 4th row.  The dolphins were lovely and I really enjoyed them. Then people started chanting "Shamu, Shamu, Shamu" and putting their arms up in the air.  As the noise became deafening and a giant swell appeared in the tank, Jack looked down to see me shrinking behind the bench, tears rolling down my cheeks.  When Shamu landed up on the platform next to me, I'm pretty sure I injured five people climbing up Jack's head and scrambling down the aisle to the exit.

We arrived at the dock at 6am sharp.  Everyone was cranky because of the early hour.  They took our photo before we boarded the boat.  Apparently I decided I wanted to look like I was recovering from a serious illness so I wore a skin-colored scarf on my head.  Not to mention the bags under my eyes from lack of sleep the night before. Worst photo of me ever. not sure why I'm posting it except for a good laugh.  We said we'd look miserable on purpose because it was 6am.  Half of us committed and half thought it was a joke. 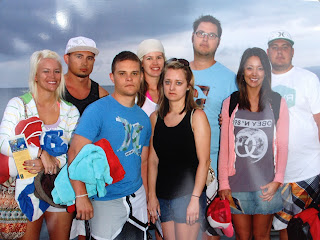 I was happy to see that the boat was bigger than I had expected.  Maybe the whales would interpret it as a threat and stay the H away from us.

The weather was coooold.  It was overcast and windy, and once we got going our ornery group huddled under our towels a little and silently accepted coffee cake and fruit for breakfast.  We had to use our towels because, if I remember correctly, no one brought a jacket.  We were in Hawaii!  You don't wear jackets in Hawaii!  ....am I right? :)

So someone gets on the intercom and explains the trip and the rules and then says that there's a good chance we will get some whale sightings.  Sure enough, about 5 minutes later someone shouted "I see one!"  I remained in my seat and pretended to be super interested in my phone while everyone rushed to the side of the boat and snapped pictures and ooohed and aaaahed.  (Jack asked if I wanted him to stay with me and I told him to go look). This happened a few more times and things settled down a little bit.  Our group was in better spirits and were sitting together joking and laughing.  I looked out at the water and saw....a whale.  It was far in the distance and I think I only saw it's head, but wow.  My mouth dried out and my heart beat faster.  But then it went back in the water.  I waited for it to get closer to the boat and land on us or tip us over.  I thought about how I'd never see my daughter again.  I thought about being sucked into the depths of the ocean holding Jack's hand.  It never happened.  I saw another whale and waited.  Again, nothing.  I relaxed.  I was on a boat next to whales!  I felt empowered. 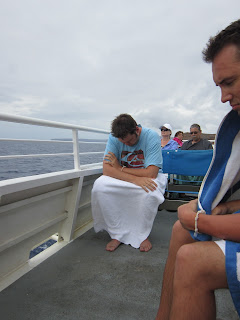 This is a baby whale who was following it's mama 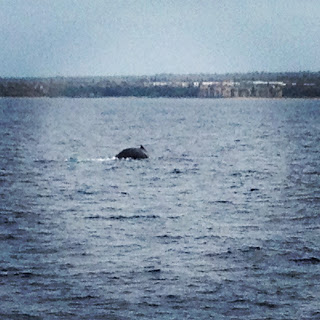 We went to the lower level of the boat to be fitted for wet suits.  The girl looked at me and handed me an x-small.  "Ahem.. you are very sweet but I don't know if you noticed that I am extremely pregnant." She smiled at me "that's a maternity top."  A maternity wetsuit?  Fishy.  Even so, I haven't worn an extra small since I was 10.  She saw my skepticism, "do you want to try a small?"  I took the slightly larger top from her and Jack helped me pull it over my belly.  Not a bad fit.  Sure enough, it was loose in the armpits and would let in some water, but I wasn't about to peel it off and wrestle into the original (extra small!) one, so I went upstairs.  I felt like a busted can of biscuits in that wet suit but it was pretty warm. 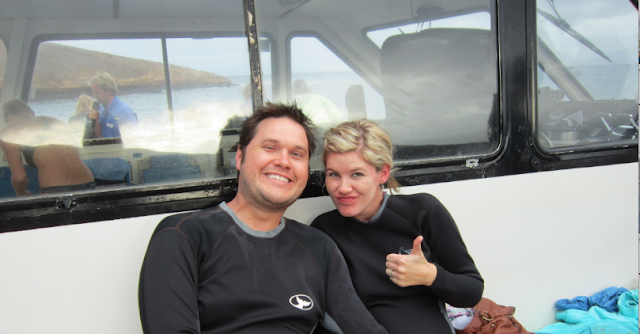 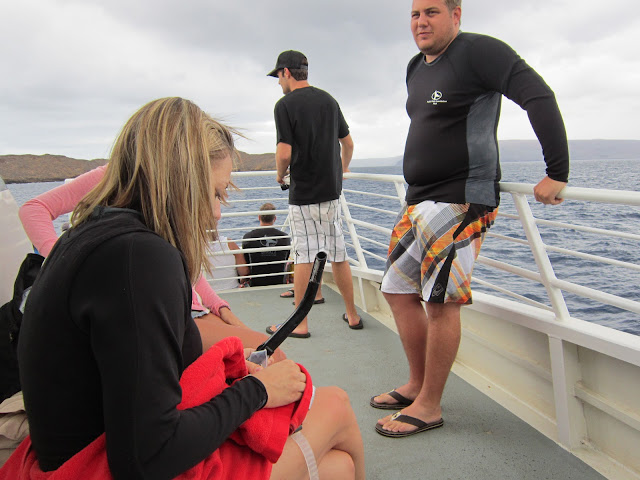 We reached Molokini Crater.  It was still overcast and chilly, but the water was remarkably clear and blue.  I'd heard that this particular crater was considered by some to be the best snorkeling in North America.  There was a slide on the side of the boat where we could enter the water in our gear.  Suddenly someone came on the intercom and said "If you'll look over to the entrance of the crater, there are three whales!  I've been doing this for 12 years and have never seen whales enter the crater before!"  ....great. 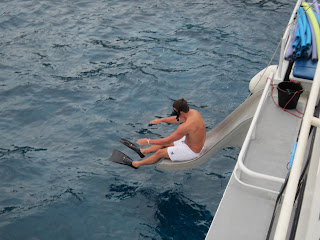 It took me half an hour to get in the water.  I told Jack to go on by himself and he said he'd wait until I was comfortable.  Finally I just put on the flippers and mask and went down the slide.  I was in the water.  In the ocean.  By whales.  I panicked, I felt like I couldn't breathe.  Suddenly my wet suit was too tight.  I didn't know where the whales were who had come to the mouth of the crater.  My flippers were dragging me down (or maybe it was an undercurrent created by giant tails and flippers).  Jack reached me, put an arm around me, and tried to talk me through it. I tried not to drag him down, but I was suddenly sobbing and shaking and I couldn't stay afloat.  I swallowed some sea water, and he held me under the armpits.  The captain, who was monitoring all of the snorkelers, noticed we had an issue and asked if we wanted some water noodles.  He then produced a few from a large bin that we hadn't noticed and tossed them down to us.  Buoyed up by the noodle, I felt a little better and was able to take some deep breaths.  Jack asked me to pull my mask down and look into the water and I did so.  There were no whales below me, just tons of beautiful fish and plants.  Instead of looking out toward the dark sea, I looked toward the crater and saw more fish and lots of coral on the lava rocks.  We were going to live.  :)  Jack showed me how to position my snorkel in my mouth and breath through it and we both dunked under and made our way through the fish, me clinging to my noodle.  It turned out to be quite an experience and I'm so glad I did it.

Nevertheless, when we reached our second snorkeling location we decided to stay on the boat.  Due to weather, the crew ended up going to Wailea beach instead of the original location and Jack had just been snorkeling there the day before.  I was cold and tired.  They had grilled chicken sandwiches, hot dogs, and salads on the boat for lunch and when we headed back they lowered some sort of sonar into the water and we could hear whale sounds and then we saw a whale do a full breach pretty close to the boat.  I didn't even look away. 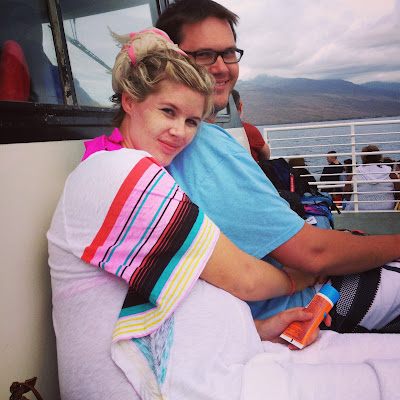 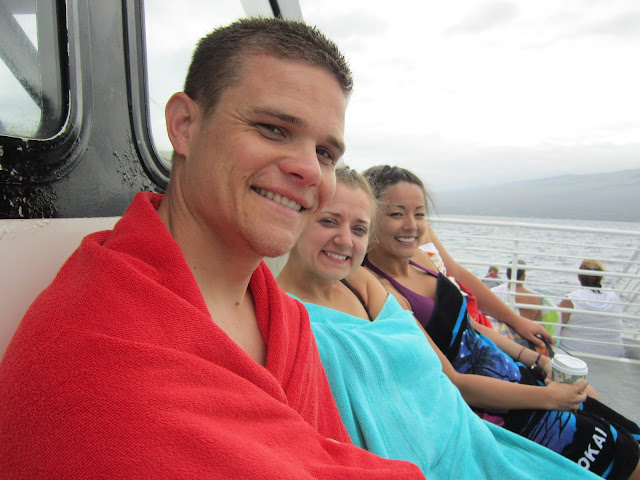 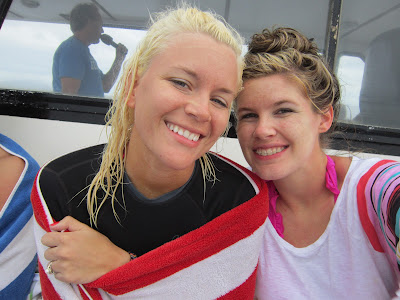 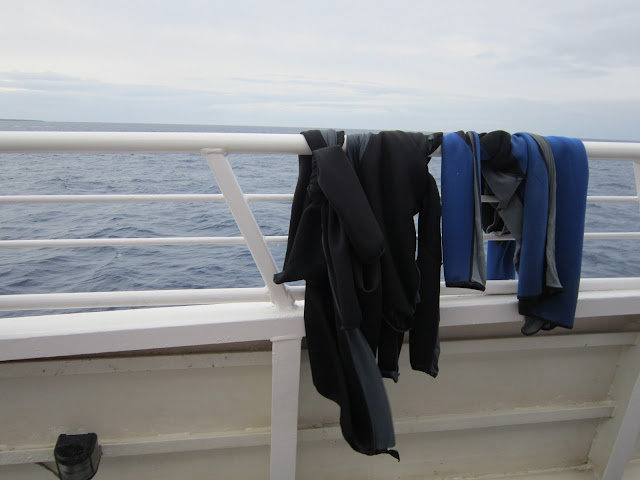 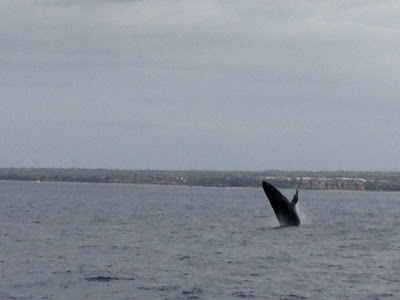 After docking I bought myself and Olivia a whale shirt to celebrate my accomplishment and then our group drove into town to do some shopping and have ice cream.  Jack and I saw a Bubba Gump's, which is his favorite restaurant, so we stepped in for some shrimp and sodas.  I also found a perfect bracelet for my mom to thank her for watching Livs.  It was green volcano rock.

That night Kassie and Eric barbecue'd and we all sat down to dinner in our condo and then played games and talked.  Was I still afraid of whales? Yes, but I had gone on the excursion and survived and didn't make a fool of myself.  I felt pretty great.