My doctor is fantastic and I have loved going to him.  However, yesterdays' appointment put a bad taste in my mouth.  Some appts I come away from feeling great and excited.  Yesterday Jack and I brought Olivia and she was terrible.  The nurse asked me to disrobe from the waist down and sit up on the table with a sheet around me.  Olivia was not having it.  She required that I hold her while sitting up on the table.  The nurse came back in and informed us that my doctor had gone to deliver a baby and would be back in 20-30 minutes.  At 35 weeks I didn't really want to miss my appointment since Olivia came at 37 weeks and this time the doctor had told me at the previous appointment that this one could come even sooner because it was my second.  The nurse put the gel on my belly to listen to the heartbeat.  I don't know if she was unexperienced or didn't usually do this but was filling in while the doc was gone, but it took her a while to find the beat.  My anxiety was rising, the longer it took and then she said "has she been moving a lot?"  ?!   I suddenly couldn't remember the last time she had moved, it had been a busy day!  Before I went into panic mode though she finally found the heartbeat and said it sounded good.  Jack then took a screaming Olivia out to the car and went to get a snack.  I sat in a sheet for half an hour.

When the doctor was back I was first on his list so he came in pretty quick.  I called Jack to tell him he could come back up if he wanted and he did.  The doctor asked when my due date was and I told him June 13th, but that Olivia had come at 37 weeks and that he has predicted the second baby would be at least as early.  He laughed and said not to expect anything.  What??  "Just....being prepared I guess." I told him.  I don't care if this baby comes before her due date, I was just expecting her to be early because that's what he had said!  He then asked if I wanted to schedule now.  "Schedule what?" I asked, "An induction."  My due date was a month away!  Do women now schedule their babies instead of waiting until they come naturally?  "No, I'll just wait." I said.  The doctor said he would make a note of that so he'd be sure to remember and not keep asking me.  Are doctors now pressing women to schedule their labors?  This seems weird to me.  I understand an induction if there's danger to the mom or baby, or if the mom goes a week past her due date and her body isn't responding the way it should, but why not wait until that point?  Why drug your body into expelling the baby at your own (and the doctor's own) convenience?  Maybe I am offending some people here, I just didn't know this was the norm now and it seems strange to me.

He did my strep B swab and checked to see if I was dilated at all. Which hurt as usual. 1cm and 25% effaced.  Sounded good to me.  We will see what next week's appt holds, hopefully it will be better. 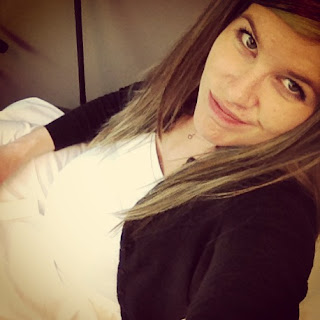 chillin' in my sheet
Posted by McCall at 1:38 PM