giving up the dog

We have decided to sell Tucker.  I think Jack has wanted to for a while, they aren't the best of friends, but I haven't wanted to so he hasn't pushed it.  Growing up my family always had dogs.  We bred and showed purebred boxers and our dogs were part of our family.  My boxer was named Breezy and she would sleep on my bed with me.  When we moved to a sketchy part of La Verkin right before my parents got divorced she was stolen out of our back yard and I was devastated.  Jack and I were married  in Jan 2010 and he let me get Tucker a month later.  I wanted us and our kids to have the kind of relationship with Tucker that my family had with our dogs growing up.  It happen the way I thought it would.  Maybe it's his breed, or just his personality, but I've never felt very connected with him.  When we had a baby and all my attention went toward her, Tucker kind of got the short end of the stick.  I wasn't able to take him on walks as much or play with him, and with the new baby coming I knew that he would get even less attention.  I didn't feel like it was fair to keep him.

I struggled with the decision and Jack was worried that I was just doing it for him so he was on the fence too.  I prayed about it and didn't feel strongly either way so I just made a choice.  I posted him on KSL yesterday (for a thousand dollars less than we paid for him :S )and by last night we had three potential buyers.  The first to contact us was a mom with four kids who had just bought a female French Bulldog and wanted a companion for her.  The lady's husband trains quarter horses (just like my dad) and they live on a farm in Payson.  It was a better situation than I ever could have hoped for and we accepted her offer of sale.  I feel good about it even though I am sad to get rid of him, I think it is more guilt than anything.  I feel bad that I didn't do better by Tucker and that I didn't made the effort and put in the time with him that I should have.  I know that I won't be able to do better in the future though, so it's a farm life for him!  Maybe someday when the girls will appreciate it more and be able to care for a dog we will get another one...maybe a boxer :) 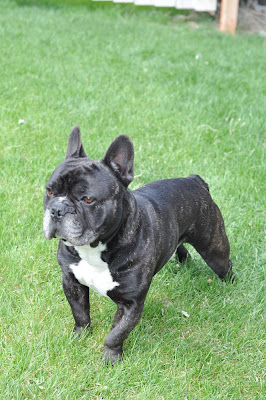