Olivia is going through the classic regression stage where she all of a sudden is having accidents every day!  This potty training thing has been a lot harder than I thought it would be.  Before the regression she hadn't peed her pants for several weeks and now it's as if she has gotten a little too confident or lazy or something.  Or maybe I have gotten to be those things.  She doesn't stop playing to pee and then will suddenly scream as she realizes she is going in her underwear.  Or I'll ask her if she needs to go before we get in the car to go somewhere and she says no and then pees at the park.  I've gone back to basics a little bit and buckled down yesterday and made her go before we went anywhere and started asking her again every half hour or so if she needed to go.  No accidents yesterday.  Also, she won't take off her own pants!  If I'm not in the room and she needs to go, she will yell at me and I have to rush in and strip her down so she can go sit on her potty.  I think I prefer this though to her taking her pants off when I don't want her to.  Also, she is a champ at going in the big potty and will go in public places or at friend's houses.  It's so cute to see her tiny legs draped over the huge potty, her hands on the seat to keep her from falling in (I make sure to wash them doubly well afterward).  She is good at going potty before naps and bedtime and wakes up from naps dry, but still can't get through the night.  I peed the bed until I was embarrassingly old, so I can't fault her for that (I read that bed-wetting is genetic and am praying she doesn't get my genes in that regard) and we just put her in one of those diapers every night that you have to step into and pull up (so they feel a little more like underwear to her).  Also, she struggles with pooping in the potty and will wait until night to go, whether she is wearing a diaper or undies :/  I'm hoping she'll just get to the point where she can go in the potty.  It's certainly an ongoing, difficult process, but so nice not to have to change her diapers anymore.  And honestly she has been a champ about it.  I'm sure she isn't harder than any other child, I just didn't know what a huge task this would be.

Liv used to be such a good eater.  I made sure when she was a baby that she ate pureed veggies long before she tasted fruit so that she'd develop a taste for them and not want sweet things.  She never had candy before she was about 18 months.  Her first birthday cake wasn't even really a cake, it was a whole-wheat carrot applesauce cake with homemade whipped cream for frosting.  I was the health-nut mom who would pack veggie sticks and raisins on every outing and cover her eyes so she wouldn't see other kids pull out their bags of fruit snacks.  She loved food and ate well.  Fruit was like dessert to her and she could ingest her weight in watermelon or grapes.

And then I got pregnant.  I could only be out of bed for a couple of hours at a time, and the smell of food made me run for the bathroom.  I couldn't regulate her meals or snacks, and storebought became the norm.  I had made lots of healthy frozen meals for her, but we soon ran out of those and I had to keep her content with treats jwhile I laid around all day.  I couldn't make dinners so Jack had to get takeout a lot.  5 or 6 months into my pregnancy I wasn't sick and wasn't as exhausted anymore but the bad habits stayed, especially once Berlin was here and I had to take care of a newborn too.  It got to the point where Olivia would not eat meat, vegetables, or eggs, asked for a cookie or "peedow" (her word for candy) about a thousand times a day, and was having the same rotation of meals every single week.  PB&J, grilled cheese, homemade mac and cheese, and yogurt with fruit.  I even felt good when she was eating chicken nuggets because at least it meant she was getting protein.

I tried just being tough: putting good food in front of her for dinner and then letting her go to bed hungry when she didn't eat it.  This backfired and she stopped eating any meals and started to lose weight and then I'd give her what she wanted just so she would eat something!  I mixed things into sauces and smoothies.  The sauces worked but she no longer wanted smoothies.  Also, anything unwanted got chucked on the floor and some meals would end in tears (for both of us) especially when I had spent a lot of time making something that I hoped would tempt her and she wouldn't even touch it, or when I'd try to force something into her mouth and she'd act like I was abusing her. Finally I did something that is discouraged among all parenting experts.  I bribed her.  Olivia is a sucker for cookies ("toodies").  One night I spooned a small pile of corn onto her tray and told her that if she ate it all she could have a cookie.  She looked at me and started eating the corn.  I was incredulous.  Something worked. 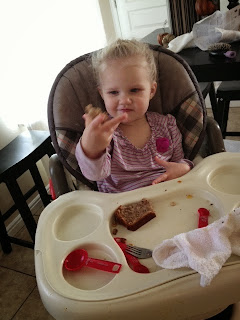 Now there were some nights this wouldn't work, especially if there is something she really just does not like.  Sometimes we have to compromise and I'll come down on how many bites she has to take, but the point is, this is working for us.  As of last night we had gotten to the point where I put some carrot sticks in front of her and told her if she ate them she could have some fruit (I try to talk about fruit as a treat since it helps create better habits and she doesn't really care since she loves it and
it's still sweet).  She was hesitant, so I put some ranch on her tray so she could dip.  She ate the carrots (and a fish stick that I called chicken) and then was thrilled to have some pears.  Bribery may be frowned upon, but for us it has lead to success. :)
Posted by McCall at 1:55 PM