We had breakfast Monday morning at Café Luna in Cambridge.  Jack got the chipotle black bean omelette with pulled chicken and I got the double buttermilk waffles with fruit and cream on top.  Jack is a sucker for anything with “chipotle” in the title :)  both were just amazing.  When we go out, we usually order two things we both want and share both of them. 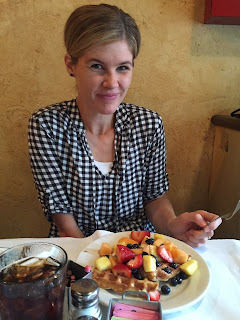 During the early days of the revolution and the siege on Boston, General Washington lived in a house in Cambridge that was later owned and lived in by poet Henry Wadsworth Longfellow for 50 years.  It’s known as the Longfellow House and the only day of the week it is closed is Monday.  The day we were there. Awesome.  So we stopped and just took a picture in front of it, the yard was gorgeous. 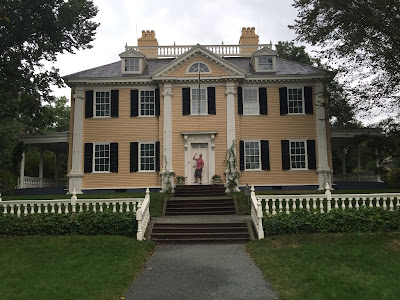 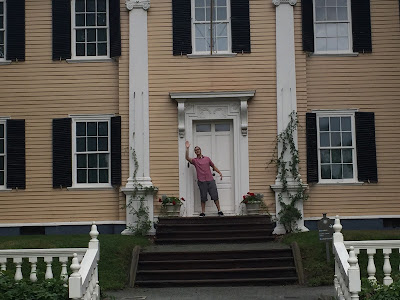 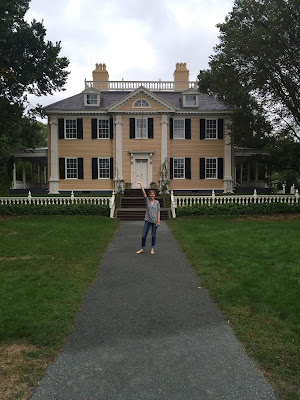 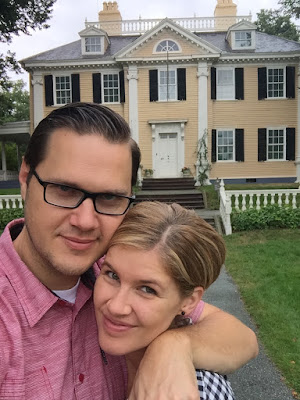 We also stopped at Harvard Square and walked around campus a bit.  The buildings were really old and cool.

Jack and I decided this year to make our big vacation Boston.  Jack had wanted to go there for a while and has been deep into the history the American Revolution for a long time now (not to mention our new obsession with Hamilton).  His favorite book is 1776 by David McCullough (He read it over again right before our trip and got me to read it too, though I'm still not through it I'm really loving it).  We booked a flight clear back in February to leave Sept 17th.  We thought it would be fun to rent a car and fly back from New York a week later.  Jack put me in charge of the itinerary and I planned a whole week of stops along the New England coast.  I'm embarrassed at how many hours I spent picking hotels, activities, and restaurants.  I had about ten pages of notes that I condensed into a one-page calendar schedule itinerary haha.  I wanted everything planned because some of our city stays would be short and I would hate the feeling of finding out I missed something that we should have seen there!  Also, Jack and I have a big problem with "throw away meals"...you know, when you're on vacation and you eat somewhere that's just okay and it's frustrating cause you know that the city has so much fantastic food that you could have tried.  Food is a big deal to us.  It's half the fun of a vacation, trying new local places.  Maybe we're weird :)

My mom watched our two older girls most of the time, with help from my little sister, Bee (Brittain), and Jack's sister, Pam.  These three ladies were the ones who made this trip possible for us and we are so grateful for their generosity and sacrifice of time! We took Asher with us because she is still breastfeeding and won't take a bottle (or binky for that matter)....and also to ease the separation anxiety for us in leaving our other two.  It helped to have one with us

Our flight left at 9:40 Saturday morning and Bee showed up bright and early.  The flight went well, Asher took a nap and I had packed plenty of new toys to interest her and some snacks.  We only took carry-on bags so each of us were allowed one suitcase, one backpack, and then they let us take our car seat and stroller right up to the gate and stowed it under so they would both be waiting for us as soon as we stepped off the plane.  Instead of bringing Asher's pack n play, we called each hotel we'd be staying in and they all confirmed that they would have a crib waiting in each of our rooms.  We love flying with Delta and have found them to be very accommodating for families.  We were also able to take as much baby food on as we needed without a liquid limit (they don't have a limit for formula or breastmilk either, which is so nice), and they let us board first to get settled.  Jack had the aisle seat and me the middle, with a girl about my age by the window.  Here's my Instagram post about it: